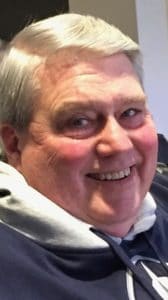 It is with sadness that we announce the passing of John Patterson on December 19, 2019, at the age of 65 after a long and courageous battle with cancer.

John was born in Meaford, Ontario, raised in London, Ontario, and moved to Winnipeg after graduating from high school. He worked for Transport Canada in the 1970’s, traveling to the high arctic and airports throughout the prairies, then in the oil patch in Alberta throughout the 1980’s. He settled back in Manitoba in the 1990’s, marrying Cindy on his birthday in 1995. Later in life, John worked in the carpet and flooring industry, leading to his role as Partner of Western Fabrics. Hard work and perseverance were an essential part of his life and he has passed this on to his boys. John was a great storyteller; his energetic and humorous stories will be missed. He was also a big fan of the Jets and the Blue Bombers and was delighted to see the “Big Blue” win the Grey Cup, at last, this past November.

John’s family would like to extend their gratitude to his determined and compassionate medical care team who helped John battle his lymphoma over the past five years. A special thanks to Dr. James Johnston, Irena Hibbert and Dr. Dhali Dhaliwal.

John’s life will be celebrated for his courageous acceptance of his circumstances, his unselfish and caring nature, his sense of humour, and the deep love he had for his family. A service of celebration will be held at 10:00 a.m., on Saturday, January 4, 2020 at Our Lady of Perpetual Help Church located at 4588 Roblin Blvd, Winnipeg, Manitoba.

In lieu of flowers, donations may be made in memory of John to CancerCare Manitoba Foundation.