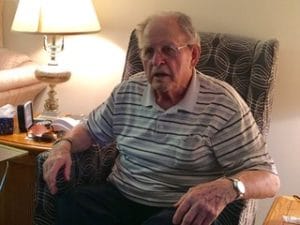 In loving memory of Steve Romas, husband, brother, uncle and friend who died on March 17, 2020, 4 days before his 93rd Birthday.

Left to cherish his memory are his brother Peter and wife Adeline, sister Leona and husband Gerry, sisters-in-law Cathie, Sophie and Linda; numerous nieces and nephews and Steve’s special friend, Mary. Steve’s humour and friendship will be missed by all his friends and staff at Concordia Village.

Steve was predeceased by his wife Nellie; his parents Henry and Nettie Romas; sister Jean; and brothers Barry, Nick, Ernie, Norman and Paul.

Steve was born and raised on the family farm in Oakbank, Manitoba. In 1951 he moved to the city and started working at CPR. He worked there his entire career until he retired in 1991. In 1952, Steve married the love of his life, Nellie Krawchuk. They resided together in East Kildonan until Nellie’s passing in 1996. Steve remained there until his move to Concordia Village in 2015.

Steve had many friends at Concordia Village, and he could be found most days socializing in a group in the front lobby of Building 1.

The family would like to extend their thanks to the wonderful team at Concordia Village for their care of Steve on his final day, and the kind support that they have shown our family.

The family has respectfully proceeded with cremation, and we will have a celebration of Steve’s life at a later date, once we are all able to congregate and celebrate as a family.