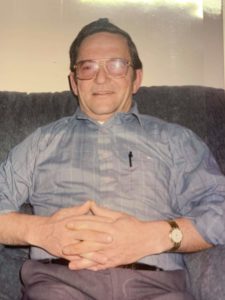 Peacefully at the Villa Youville in Ste. Anne, MB, on March 20, 2020, Leslie Archie McCallum passed away at the age of 78, with his daughter by his side.

Les was born on March 10, 1942 on the family farm outside of Rathwell, Manitoba and attended Cherry Valley School. Leslie had a variety of jobs over the years, but his passion was farming and animals. He also drove semi for Kleysons Transport for many years until he had his massive stoke at the age of 57.

Leslie loved to go for drives and “check out the crops” in the area or maybe a little further away. You never knew which neighbor he was going to drop in on that day. Leslie liked to visit when he wasn’t outside working or checking on his livestock or napping on the couch after lunch. Leslie liked spending time with his family and friends, listening to old time fiddling, travelling and attending auction sales to see what kind of treasures he could find. Later in life you could often find him at the Army and Navy in Portage La Prairie on a Friday or Saturday night socializing with his friends, playing the slots or taking a turn or two around the dance floor to a waltz or a good polka as the band played.

Ten years ago, Leslies health took a turn.  He developed Dementia and he moved into a care home in Vita, Manitoba. Almost two years later he moved to Villa Youville in Ste. Anne where Leslie lived out the rest of his days with the amazing staff and Sister Irene who always brightened his days up.

We would like to Thank all the staff at Villa Youville who took wonderful care of dad. You are all amazing, and Sister Irene who was also there beside Dad while he took his last breath and said a prayer for him as he passed into heaven. Thank you everyone.

After careful consideration regarding the new COVID-19 crisis, and in the interest of the community’s health, the family has decided to hold a private memorial service. Broadcast of the live stream memorial service will be available on Friday, March 27, 2020 at 1:00 p.m. Please visit: Voyage Live Stream to view. A private family and close friend’s interment will be held at a later date at the Woodlands Cemetery in Treherne, MB.

In lieu of flowers, donations may be made to the Heart and Stroke Foundation of Manitoba or the Cancer Society of Manitoba.