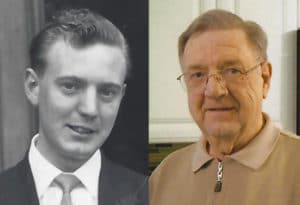 It is with great sadness that we announce the passing of John MacKenzie, who died at Health Sciences Centre on Thursday, March 19 at age 84.

He was predeceased by his wife, May; and parents, William and Jessie MacKenzie.

He is survived by his children John (Debbie), Vikki, Shona and Alan (Kathryn); granddaughter Lara, who already misses her pal so much; brother Brian (Joan); nephew Mark (Paula and Aysling); and his close companion Carol. He will also be remembered by the Fraser family and many other friends and relatives in Scotland, as well as the many connections he made in the Winnipeg music community.

John was born on December 15, 1935 in Inverness, Scotland. He started playing music at young age, which led to playing with the Royal Air Force band. While in Scotland he worked at the Tomatin whisky distillery before starting a career in health care. Given limited employment opportunities, he and May moved the family to Selkirk, MB, in 1964. He spent a few more years in health care before becoming a social worker with the City of Winnipeg. After his retirement in 1994, he focused his time on two of his favourite things; his granddaughter and his music, which they also shared together. He played fiddle with Comhaltas Winnipeg, the Southglen Fiddlers and regularly at Folklorama’s Pavilion of Scotland with guitarist Ed Goletzki. Even when his health took a turn last year, he still played as much as he could because it’s “all about the music.” He last performed at a jam night at Sam’s Place on January 31, 2020. The Auld Yin was also known for his great hosting skills (“I’ll pour your first drink, but after that you’re on your own”) and love of Scotch whiskies – which we’ve learned should never be poured with a measure.

The family will hold a private service and a celebration of John’s life will be held at a later date (somewhere with drinks and music).

In lieu of flowers, donations may be made to the Canadian Cancer Society.

“Cheers, dad. We love you and miss you already.”